An unforgettable meal with “DALVA”, the new porcelain knife 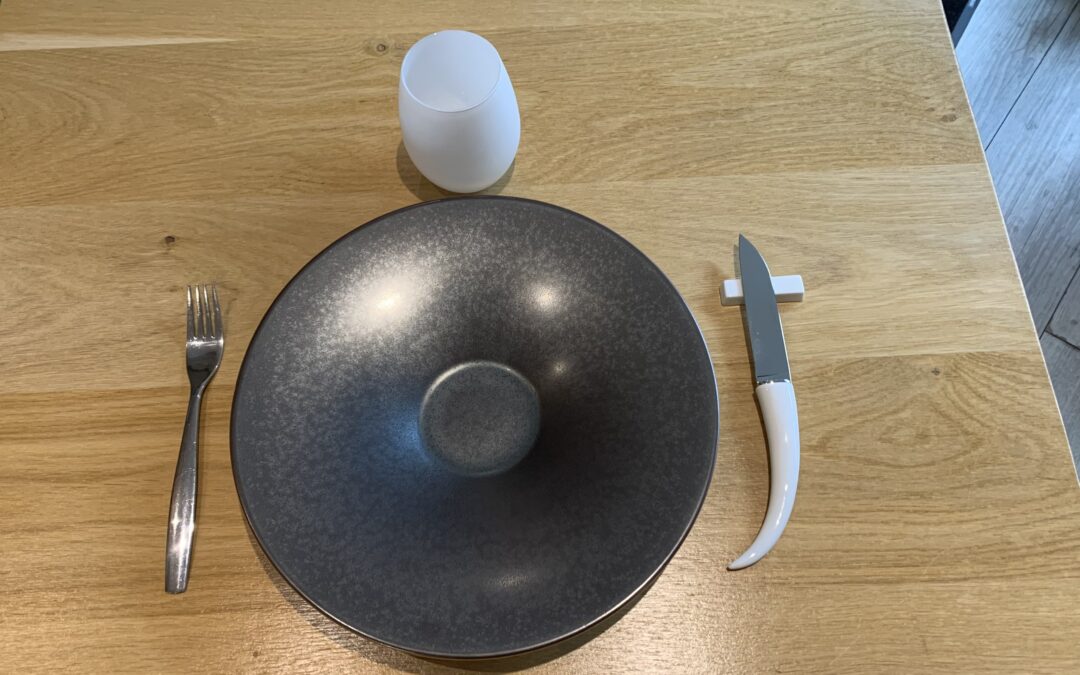 “DALVA”, the new French and design porcelain knife from COUTELLERIE NONTRONNAISE, a success of regional synergy!

A handle made of white Limoges porcelain, a reversed blade: with this new knife designed by Franck FAUGERE, the COUTELLERIE NONTRONNAISE has achieved a technical feat and is offering an amazing and luxurious creation that is rooted in the soul of the Aquitaine region.

The adventure begins in the heart of the Périgord-Limousin National Park, in Châlus, when a deer antler shape caught the eye of walker Franck FAUGERE. “For years I wanted to create a knife with a porcelain handle, but I didn’t have the line in my eye. Suddenly, when I saw this antler, I thought that it could be a very beautiful shape,” explains the designer.

The designer worked, drew, and sought the advice of his wife, the owner of the gastronomic restaurant “Le Relais de Comodoliac” in Saint-Junien. Noting the persistent problem of the blade becoming blunt when placed on the plate and the need for regular sharpening, Franck FAUGERE opted for a blade with an inverted edge. Inspired by the Royal sailors’ blades of the 18th century, it limits the contact with the plate while improving the efficiency of the cut.

Because of his deep commitment to the Périgord-Limousin region, it was crucial for Franck FAUGERE to include his project in a consistent heritage approach.

It remained to arouse the interest of EPV companies that accept to take up the technical and commercial challenges that it represents.

The President of the Limoges Chamber of Commerce and Industry intervenes. La Coutellerie Nontronnaise respond with great enthusiasm. The Ateliers ARQUIE are chosen as the partner for the manufacture of the handle, while the cardboard for the presentation box is entrusted to one of oldest workshops of the region: Les Ateliers de Peretti.

La Coutellerie Nontronnaise is both the main actor and the project manager.

Gilles GASSOU, Director of COUTELLERIE NONTRONNAISE, says: “For a long time, we had been thinking about making a knife with a handle made of a different material from those we usually use. When this project was proposed to us, we were immediately seduced by the refinement of the aesthetic choices, linked to the material of the handle, and the technical challenge of the production. The choice of a feminine name “DALVA” proposed by Franck FAUGERE also appealed to us.  Finally, the synergy of the regional energies involved in making a French product that is rooted in our region won our support. “

Trials, matrices, prototypes, it took three years for all those involved in to move on to execution. “This is a project that required acute precision in the development of the manufacturing stages. Porcelain is a fragile and living material and we are particularly demanding on the stability of our knives and the quality of the cutting edge of our blades” explains Gilles Gassou.

After forging the blades on a “pattern” developed by Franck FAUGERE, the manufacture of “DALVA” enters a second phase.

The Ateliers ARQUIE proceed to a first firing of the handle in which a false silk has been introduced.

Gille GASSOU gets back the handles. The teams of the COUTELLERIE NONTRONNAISE carry out a first assembly to check the straightness of the axis of the blade; the handles are sent back to the Ateliers ARQUIE who carry out the second firing, enameling, and polishing. Then it is time to assemble the blade, which is inserted into a stainless-steel disc.  This innovation from La COUTELLERIE NONTRONNAISE reinforces the stability of the knife, while completing its aesthetic. Then the tang of the blade joins the heart of the handle before the last stage: gluing.

Now the “DALVA” and their knife holders have joined their 6 Piece Box Set.

“It is a very beautiful object which we are very proud of. Besides it presents a very pleasant tactile characteristic: a sensation of freshness when held in the hand and something soft.”

And it is a great reward to have been able to support an approach that promotes the heritage of Périgord companies ” concludes Gilles Gassou.

A knife that expresses the spirit of this land, as the text written for the occasion says perfectly: “A land of fire and tradition, the Périgord-Limousin is rooted at the crossroads of thousand-year-old knowledge.

The unalterable steel of the COUTELLERIE NONTRONNAISE, the diaphanous porcelain, a combination of the Kaolin of Saint-Yirieix and the fire of the Limoges kilns, the sculptural creations of the cardboard makers of Saint Junien, “Dalva “* pays tribute to them through a unique knife, an exceptional piece of craftsmanship, a feat of hands and work”.

The most demanding amateurs of French tableware will appreciate this creation, a symbol of all the excellence of the Périgord-Limousin region.

“DALVA” and their knife holders are available in a 6-Piece Box Set.

*Dalva is Jim Harrison’s flagship character, a famous representative of the literature of wild and wide-open spaces and traditions.

After studying law and economics, Franck FAUGERE took a turn at 190°. Passionate about heritage and wide-open spaces, he decided to devote himself to the creation of beautiful objects that carry tradition and innovation. Founder of the FF company, he is also a blacksmith and mason and has worked for historical monuments.