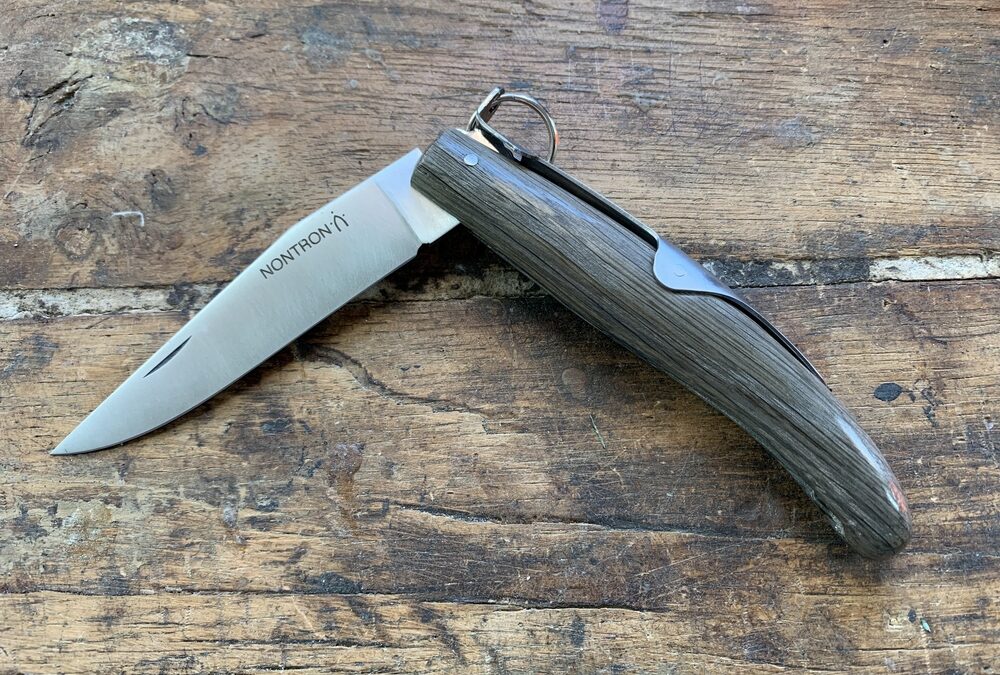 On the occasion of November 11, Coutellerie Nontronnaise made a special order at the request of one of our resellers: a limited edition of the Soldier’s Knife made of machine-gunned wood a mixture of oak and steel.

On the occasion of the commemorations of 11 November and at the request of one of our retailers, we, “La coutellerie Nontronnaise” decided to make a very special knife.: a limited series of the Soldier’s Knife made with a machine-gunned wood, mixture of oak and steel.

Oak and shrapnel, between light and dark grey

The wood used to make the handle of this knife is machine-gunned wood. This wood is more than a hundred years old and comes from a very specific place: the Haute Chevauchée. The spot is in fact a front line located 20 km west Verdun. The color of the wood ranges from light grey to darker, an effect due to mixture of the iron of the shrapnel and the tannin of the oak. This knife, whose history is deeply linked to our “poilus” in the trenches, is made from wood, which is today one of the only witnesses of these terrible combats.

Entirely handmade by our cutlers

105 years after the first knife made during the Great War (see below), “La coutellerie Nontronnaise” received for this very special item, an array of raw oak planks which were cut and entirely inlaid to shape a handle entirely by hand, the pieces of steel risking to damage the machines.

In this period of commemoration, “La coutellerie Nontronnaise” have stirred up their know-how, passion and enthusiasm around this project. The most beautiful pieces were chosen to sublimate this mixture of wood and metal: the steel splinters mixed with the oak veins give each knife a unique aspect.

How to buy this Nontron exclusive knife ?

Argonne forest, machine-gunned because of the Great War

Also, the Great War of 14/18 left its mark on the area. After the battle of the Marne, the German army retreated to the Argonne. For four years, a frightening face-off pitted the German army against the French army. Hundreds of thousands of shells fell on the forests and villages of the Argonne over a few dozen square kilometers.

The forest massif still bears the scars of this fighting, kilometers of trenches, shelters (Kaiser Tunnel, Kronprince Shelter), the earth bears the traces of the victims of this fighting and their equipment. The trees that are still standing point to deformed trunks and emaciated crowns.

The knife as a weapon appeared in 1915 in the hand-to-hand combat that took place in the trenches, and unlike the French soldiers, the German soldiers were equipped with knives. This is why on 19 April 1915, General JOFFRE asked one of his subordinates about the interest of such a weapon for our army and the quantity that would be necessary.

Shortly afterwards, the cutlers were sent back to their workshops and “La coutellerie Nontronnaise” began supplying the French army with switchblades.

With their knives in their pockets, what else is there to do for history lovers but to go to the Argonne and discover the high places of the Great War and what remains of it, while taking advantage of these landscapes and these small villages today renowned for their serenity?

Nontron and the Great War, linked by history

Among the many knives made in Nontron, the knife of the soldier with its lock is a faithful reproduction of the original model developed during the First World War.

When the Great War broke out, the Bernard and Petit families, owners of the cutlery, received a providential order from the Ministry of War: to manufacture switchblade knives for the army.

A model was designed, and many soldiers received and kept it throughout the conflict. Apart from the famous boxwood handle, the characteristic feature of this Nontron folding knife is its locking system: the heel of the lock blade hooks onto the flat spring that covers the back of the handle. To unlock the knife, simply lift the ring on the blade.

Buy online the historical lock Nontron knife of the soldier

On the occasion of the 11 November commemorations, click here to buy online the original Nontron knife of the Great War