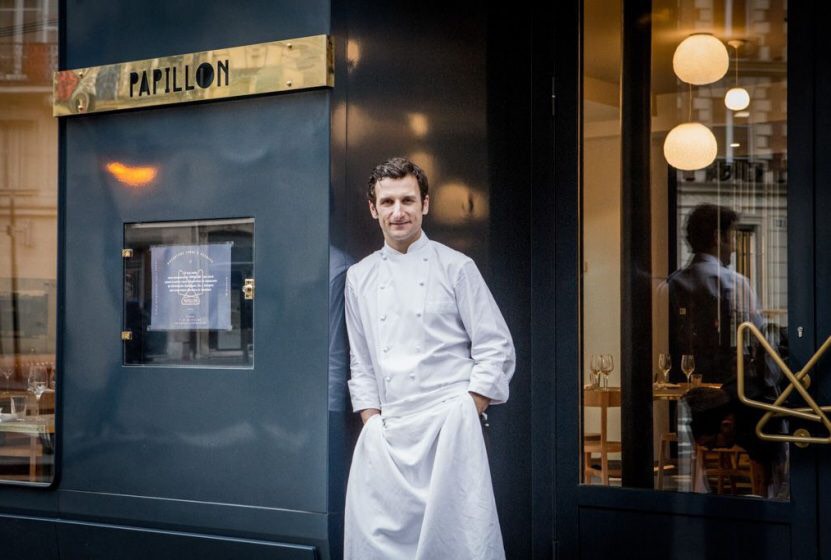 Nontron knives are a very good restaurant at Papillon!

Christophe Saintagne, installed at the controls of his restaurant Le Papillon since the beginning of the year, will cook for New Year’s Eve a menu full of flavors: terrine of hare to the royal; Scallops with Paris mushrooms and poutargue; Japanese udon noodles with ceps and parmesan cheese; pearly catfish, leeks with coarse salt, champagne sabayon; yellow capon from the Landes with black truffles and roast, apple Anna, riquette; salad and cheese made from raw milk; citrus.

“Butterfly is not a race for performance, it must be human, bring together customers, collaborators and producers, to see what we can build together”.

This forty-year-old chef brings the customer to his universe with a string of highly selected, wonderfully seasoned and generous baked goods.

Born in Pont-Audemer, between Le Havre and Rouen, Christophe is the youngest son of an interior designer and a saleswoman of home care products. He began his career in Paris, Avenue Poincaré at Alain Ducasse who praises “his finesse, his curiosity and adaptability, he makes a modern kitchen, technical and efficient, in harmony with the place, and who looks like him”.

In 2004, he joined Jean-François Piège in Crillon “Christophe was a fabulous collaborator, with him there were only solutions, never problems”. In 2010, Alain Ducasse took the challenge to eat healthy (but in a palace anyway). Christophe joins him first at the head of the kitchens of the Plaza Athénée (2010-2014 where he keeps the three stars) then at the Meurice (from 2014 to 2015) where he wins the three macaroons. “I work in cycles, I take a subject, treat it, then move on.”